How to Break Large NSF Database into Multiple Parts? 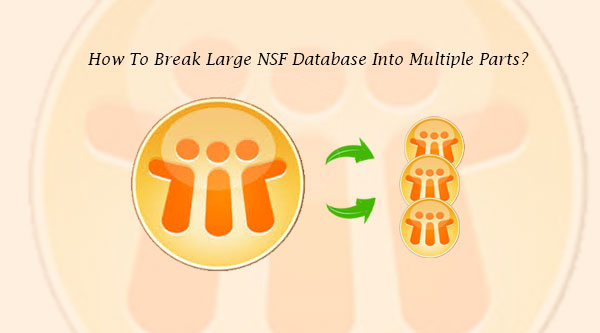 A large-sized NSF database may cause multiple problems for IBM Notes users. It may hamper the performance of IBM Notes application. Or sometimes the malfunctioning issues of a large-sized NSF database make the application very slow-processing. The situation becomes worse here when the file is found inaccessible or corrupted due to its heavy size. Such inevitable issues may lead various difficulties for IBM Notes users. Many times users are found asking how to handle this problem. Is there anything that can fix the problem without any hassle? You are lucky enough as you have landed to the right place. Keep reading this post for more information…

In many organizations, the IBM Notes is primarily used as an email client application with IBM Domino (formerly known as Lotus Domino Server). I hope you guys better know why a Server is used in an organization. Anyway, the email messages and other collaborative business information of Lotus Notes are stored into a database file which is saved with NSF (Notes Storage Facility) format. Like MS Exchange Server, there is also a Server for IBM Notes which is called IBM Domino. An NSF database file is often hosted by Lotus Domino Server. Users can download the files from the Server in order to work with a fully functional database in an offline mode. It is exactly how you do with OST files, the offline storage tables of Exchange which are created on local system.

Excessive use of Lotus Notes client will surely increase the size of NSF database. How? The file size grows as the database keep accumulating with large number of emails and other forms of data. It may get increased further with heavy attachments attached with the email messages. Users don’t have even an idea how much problematic it could be for them. Heavy files cause some serious issues which are really very painful. Due to a large-sized database, the IBM Notes client starts acting abnormally, such as: it hangs while accessing the database, crashes down frequently, becomes slow in performance, and many more. But the most frustrating event is corruption in NSF database which often takes place due to its oversize.

Now you must be thinking for a fix here. Unlike MS Outlook, IBM Notes doesn’t have any built-in compact or compress feature for reducing the size of NSF database. Then what to do now? Usually users start deleting their crucial data from the NSF database in order to the make it compact in size. They don’t even realize that it could be a blunder mistake as the deleted data will be gone forever. I strongly suggest them not to do such mistake ever. Instead of that, if you split a large-sized database into multiple parts, it will be more beneficial than any other options.

Now the thing is how to split NSF database. Though IBM Notes client doesn’t provide any built-in feature for splitting the database, but still you can try an alternative method. You can drag & drop the data from one NSF database to a new one. This will create a new NSF database having the data which you drag and drop earlier. This trick is not that much successful as it takes enough time.

Now comes a solution that is easy, reliable and highly effective in splitting NSF database files. SysInfoTools Software has recently launched NSF Splitter software in the market that is programmed to split a large-sized NSF database into multiple smaller parts in a safe mode. Safe mode means the entire operation is executed without causing any changes or alteration to the original database file. Manual tricks are always time-consuming, but this professional software is very quick in action. It hardly takes a couple of minutes and the entire operation is done successfully.