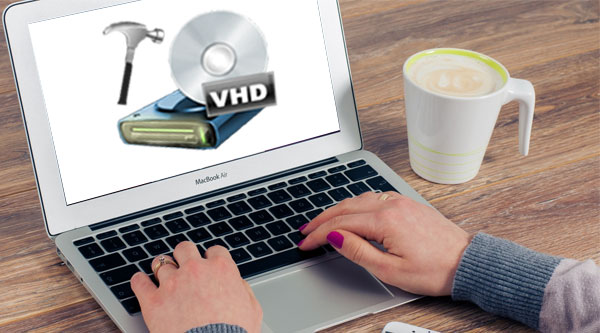 VHD means Virtual Hard Disk, and its file is called VHD file. Basically it’s a hard disk image file used by Microsoft Virtual PC. Like every single computer file, a VHD file is also prone to corruption, i.e. certain to happen. In this post, we’ll discuss on VHD files, the responsible factors for corruption, and how to repair corrupt VHD files or perform VHD recovery. For more information, keep reading this post…

Let’s first talk about VHD file. VHD file is mainly used as the hard disk drive of a virtual machine. It’s just like a normal hard disk used by your computer system for storing the entire content within a single file. It has the similar functionalities as a typical physical hard drive, but it can only be accessed managed and installed on a virtual machine. It contains the same hard drive sectors which are found on a physical hard drive which include disk partitions and a file system. Also, it may contain files and folders. Though a VHD file is created on a physical hard drive of your computer, but it has a logical distribution of its own.

The disk size of a VHD file can either be static (fixed) or flexible (dynamic). Whenever a virtual hard disk is created, a particular size is allocated. If you create a fixed virtual hard disk of 100 GB, the entire allocated disk space is taken up on the host machine. But if you create a dynamic (expandable) virtual disk, unlike fixed disk type, it only takes a tiny amount of space. It grows time by time as data is added to it.

VHD file is also commonly known as the backup created by Windows Vista and its later versions. In these Windows versions, Backup and Restore is the built-in tool used for backing up the computer data. If you are taking files backup, they are saved into ZIP archives. And if you are creating a Windows system image as backup, it is saved into a VHD file. In this way, a VHD file is also used a backup file in Windows Vista and its later versions.

Virtual hard disk (.vhd) file may become inaccessible or fail to run on a Virtual system due to corruption. As no computer file is immune to corruption, so as the VHD file. File corruption in virtual hard disk lead to severe problematic situations. Permanently data loss is one of the worst situations ever. You may lose all your crucial data forever which are saved in your virtual hard disk. The common reasons for corruption in VHD files are: virus infection, bugs attack, abruptly system shutdown, physical storage failure, malfunction virtual machine, transferring files over faulty network, etc. Whenever a VHD file gets corrupted, you’ll receive error messages on your screen. The most common error message is:

Failed to open attachment ‘C:\ directory \MyVHD.vhd’. Error: ‘The file or directory is corrupted and unreadable.’

How to Repair VHD File?

You can repair corrupt VHD file by using smart VHD Recovery software. If you search for best professional software for repairing VHD files, you’ll get a wide range in the market. Many third-party software companies are providing such recovery utilities with free demo version. Users can download free demo version of any VHD Recovery software to check its capabilities and recovery rate before purchasing the licensed version. If you are satisfied with the results delivered by demo version, you can get the licensed version of the software to save the recovered data.

SysInfoTools Software has introduced the smartest solution for corrupt VHD files by the name VHD Recovery. This software is programmed for repairing corrupt VHD files which are saved in any disk type, i.e. fixed as well as dynamic, and containing any file system of Windows, Mac as well as Linux, such as: FAT, FAT16, FAT32, FAT64 (exFAT), NTFS, HFS+ and EXTX. It supports both common partition tables, which are: MBR aka master boot record (older) and GPT aka GUID partition table (newer). Software is enhanced with numerous salient features which are helpful in VHD recovery and make the recovery operation easy and convenient.